Oba Lamidi Adeyemi III, the Alaafin of Oyo has turned 77,  and new pictures of his celebration shows how gracefully aged the monarch looks.

The Alaafin and his teenage wife struck an awesome pose at his 77th birthday which took place on Monday, October 15.

The Alaafin became 77 on Thursday, October 15, he was clad in a sash which read, “It’s my Birthday” while he struck a relaxed pose with his last wife, amidst balloons and cake.
The teenage queen whose name is Olori Badirat Adeyemi, started university this year.
Her matriculation photos went viral, and here are some photos from her matriculation-party.

Alaafin of Oyo and his teenage wife at her matriculation, earlier in the year.

The 77-year-old monarch reportedly works out to ensure he is fit for his wives, youngest of which is a teenager.
Many people have been awed as to how gracefully Oba Lamidi ages, however, the secrets are not far fetched.
Only recently it was revealed that the Alaafin works out thoroughly to look ever young for his beautiful wives.
Posted by Unknown at 15:08 No comments:

Wife of Nigeria’s president, Mrs Aisha Buhari, was on Thursday, November 5, 2015, spotted alongside Mrs Dolapo Osinbajo, the vice president’s wife and Mrs Monica Ugwuanyi, the Enugu state first lady, during an event in the eastern state.
Photos obtained from the News Agency of Nigeria (NAN) showed that the trio were also joined by the state governor, Ifeanyi Ugwuanyi to welcome Mrs Buhari and Osinbajo to the state for a health screening programme on Thursday.
Mrs Aisha Buhari has been in the news lately, as she has been pictured occasionally making appearances at events and notable occasions within and outside the country.
Below are some pictures from the arrival taken earlier today.

L-R: Mrs Monica Ugwuanyi, Wife of the governor of Enugu state and her husband, Governor Ifeanyi Ugwuanyi, welcoming the wife of the president, Mrs Aisha Buhari, during visit to Enugu for health screening programme on Thursday, November 5, 2015. Photo: NAN
Posted by Unknown at 14:57 No comments:

President Buhari finally received the formal report of the screening of ministerial nominees that ended last week.
Saraki arrived for the meeting scheduled for 3pm around 2.55pm and was escorted into one of the halls inside Buhari’s office.

He was accompanied by the president’s two senior special assistants on legislative matters, Ita Enang (Senate) and Suleiman Kawu (House of Representatives).
READ ALSO: Change! How President Buhari Saved Billions Of Naira
President Buhari was also joined by some of his assistants comprising the Chief of Staff, Abba Kyari; and the special adviser on media and publicity, Femi Adesina.

The meeting commenced with Buhari’s arrival at about 3.01pm. After the ceremonial presentation of the list to the president, all security and political aides excused the two leaders who met behind closed-doors before coming out for group photographs.
The Nigerian Senate has concluded the screening of ministerial nominees sent to it by President Buhari last week when the leader of the nation was in India.
Buhari is likely to inaugurate his cabinet tomorrow, November, 4.
Posted by Unknown at 07:55 No comments:

Popular transgender, Caitlyn Jenner has a surprise for her fans!

Popular transgender, Caitlyn Jenner has a surprise for her fans!

ADVERTISING
“Caitlyn knows she needs to push the envelope. She loves coming up with creative ways to capture people’s attention and insists it’s all in aid of drawing more awareness towards transgender causes,” a source tells OK! magazine.
Posted by Unknown at 11:23 No comments:

Living under a shadow of fear in Central African Republic

Working days start early in Bangui, capital of the Central African Republic, and they end early too because of a dusk-to-dawn curfew.
The country has been in turmoil since a loose alliance of mainly Muslim rebel groups, operating under the name Seleka, left their strongholds in the north and marched south and seized power in March 2013 from then-President Francois Bozize.
Their main leader, Michel Djotodia, briefly took over before being replaced by an interim head of state.
Since then, the CAR has lived under a shadow of fear, uncertainty and violence which has left some 6,000 people dead.
And the unrest has not gone away, far from it.
As we arrived in the capital, we were told that several people we had agreed to meet in the centre of town would not be able to make it.
It just was not safe anymore, they told us.
Three Seleka officials had been abducted and had disappeared; their bodies still have not been found.
The tit-for-tat response was immediate. The following day, three Muslims were killed. An accusing finger is being pointed at the mainly Christian "anti-balaka" vigilante militias. 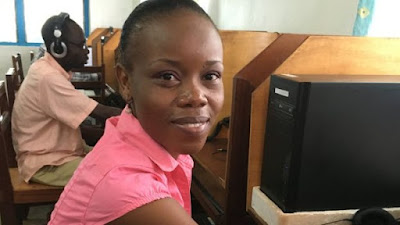 News of the latest killings was broadcast for everyone to hear on Radio Ndeke Luka, one of the most listened to radio stations in the CAR.
Even the journalists there have had to adapt to the changing situation, with staff getting in to work later and leaving earlier because of the insecurity in Bangui.
"It's a small price for us to pay if we want to continue reporting on events," the morning show presenter, Ingrid Sandanga, told me.

And she points to a large, plastic-covered, sign on the table - the station's mission statement: "Ensemble, combattons la division dans notre pays", meaning "Together, let us fight division in our country".
Religious leaders are at the forefront of reconciliation efforts, with representatives of different faiths working hand in hand.
One of them is imam Abdoulaye Ouasselegue, vice-president of the CAR's Islamic Council.
As if to highlight what he is trying to achieve, he made a point of meeting us not at his mosque but on the grounds of Bangui's Catholic archdiocese, an island of tranquillity on the banks of the Ubangi River.
He is hopeful that stability will return, but says that he no longer wears anything that may identify him as a Muslim because it is too risky.

Source: Index Mundi
When asked about the importance of the international military presence in the country under the flags of the UN and France, he lets out a long sigh of resignation, before answering: "What's the point of having peacekeepers here if there is no peace to keep?"
Father Xyste Mbredjeze-Ngasha is also hoping to build bridges.
But this Catholic priest faces a huge task - he has just been put in a charge of a new parish in PK5, Bangui's now notorious fifth district.
Home to many of the capital's Muslims, it has become a flashpoint in the current conflict.
The first time Father Xyste entered a Muslim neighbourhood in his parish, he had to be escorted by armed UN peacekeepers.
"I fear for my safety, but I must do God's work," he says.

As the afternoon begins to draw to a close, anxious Bangui residents head for home.
But for some, beating the curfew is the last thing on their minds.
They have no homes to go to. They are the thousands of people living in the capital's 28 camps for the displaced.
Keeping the peace in CAR


At the Benzvi camp, half of the tarpaulin tents are in bad need of repair, there is little sanitation, limited access to clean water and the camp becomes a quagmire of mud with each heavy rainfall.
A few months ago, the aid agency Medecins Sans Frontieres, who provide much-needed medical assistance and food relief there, were hoping to close it down.
But then violence broke out again in September and terrified Christians rushed to the camp.
More than 2,500 people survive in dire and cramped conditions, too afraid to venture beyond the camp's gates.

"Even here, I don't feel safe, I'm scared that the Seleka fighters will attack us again," one young woman now living in Benzvi told me, echoing the thoughts of many.
With peace still a long way off, the transitional government led by the interim President, Catherine Samba-Panza, is pressing ahead with plans to hold elections.
They have already been postponed once.
But President Samba-Panza still hopes to see the country go to the polls before 31 December, when her mandate expires.

"We have no other choice - our priority is to secure the electoral process," she says.
"When the time comes, we shall see if we are really able to go ahead."
As the president speaks, Rwandan soldiers from the UN's Minusca force look on.
They have been tasked with guarding the presidential compound.
It is a sobering reminder that security in the CAR cannot be guaranteed without outside help.
Posted by Unknown at 11:18 No comments:

Army Spokesman, Colonel SK Usman, revealed that the “joint intelligence community investigated and authorized” the release of these prisoners. He added that the release was part of Nigeria’s National Army Day, which was held on July 6th to commemorate the first shots of Nigeria’s Civil War at Garaken, Cross Rivers State.
Posted by Unknown at 05:54 No comments:

Governor Ayodele Fayose of Ekiti state has won the hearts of Ekiti people in many ways.
Fayose is a man of the people and does not fail to show the people that he is a man just like them.
Yesterday, November 3, the governor attended to two aged women in the state.
Fayose stopped his convoy to interact with an old woman at Oja Bisi area of the state. The woman t0old him she will be burying her mother on Friday and invited him.

The woman invited him for her mother’s burial

Fayose listens to the old while others watch

The governor promised to attend the burial ceremony.
Not long afterwards, he had an encounter with another aged woman on a street of Ado Ekiti.

There’s hardly a day that goes by without Fayose being involved in one drama or the other and he is not bothered about the criticism that trails his actions. He does as he pleases and says what he feels without fear of who gets hurt.
Yesterday, he apologised to primary school teachers in Ekiti state over the mix-up in the payment of their September salary. The governor assured the teachers of the state government’s continuous support as soon as the state finances improve.
Posted by Unknown at 05:49 No comments: